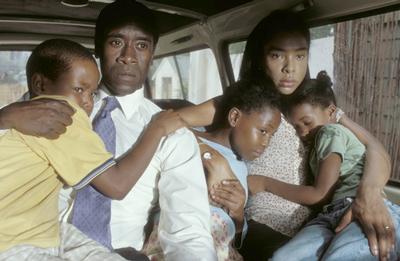 This past weekend, I saw the movie, Hotel Rwanda, Profound, powerful film. A magnificently told story, whose raw emotional impact is intensified by the movie’s skillfully woven script and score.

Ten years ago, over the course of 100 days, in the central African nation of Rwanda, almost one million people were brutally murdered by their own countryman .  The events were virtually ignored by the rest of world, in an inexcusable display of feigned ignorance.  However, one ordinary man, Paul Rusesabagina, doing his very ordinary job, did an extraordinary thing.  Inspired by his love for his family, he demonstrated great courage and used his skills as an excellent hotel manager and the favors he had curried through the years to feed, protect, house, and rescue 1268 refuges. Hotel Rwanda tells their inspiring story.

Most notable, director Terry George veers away from the usual gratuitous gore, so commonplace in many of today’s films, resulting in a growing desensitization of this generation moviegoers.  Instead of relying on the extensive use of graphic violence to portray war crimes, George drew eloquent emotional expressions from his actors employing a sense of  visible fear, of impending death juxtaposed against the innocence of children and inexorable liveliness   Additionally, the element of suspense that innocent people will inevitably be caught and brutally killed, once the UN forces abandoned the Rwandans, was a far more effective way to draw the audience into the terror of the times.

I sat in the theater, not so proud to be an American, but even more so, ashamed of myself.  Unlike Adam, (whose link, to an intriguing and challenging perspective, I have included below) I was not 14 when this happened.  I was 32.  And 10 years later, I am ashamed that my head was in the sand, and that I was not as aware as I should have been…as I could have been…and that I naively believed the lies that the news media propagated.  I know that I must be more intentional to regularly look beyond my little life and begin to be not only more aware, but to be more proactive in the realities of living in a fallen world.  I came home from the movie and surfed the web, trying to educate myself a bit.  I read the 16 declassified documents that are evidence of our inaction during the genocide.

As I read, I was further convicted at my ignorance and self absorption.  I am not sure of all that  I can do, but I can do something, and that is a beginning.  So often I get lost in the realization that I cannot do everything, or I get overwhelmed at the ‘everything’ that there is to be done and it paralyzes me…my sister, has taught me to be willing “to do or to be  a something.”  It is not all, but it is not nothing either, and ‘a something ‘is what I can offer quite often.  And the ‘something’ offers the possibility to become “a something more.’..but never ‘an all or everything’ this side of heaven.

In the last 5 years, I have since become aware of so much injustice in my own back yard, my own county, state and country, but even more so in the world, that I can not pretend I do not see.  In the movie, Hotel Rwanda, there is conversation between a journalist and Paul Rusesabagina (played by Don Cheadle) regarding the world’s response will be when they see a tape of the atrocities that are occurring in Rwanda.  Paul is hopeful that the UN troops will return, while the journalist sadly responds that he believes people will see the tape, during the 6:00 news and pause for a moment…they will think it is very sad, and then go back to eating their dinners.  I don’t want to be that person, ever again.

THE POWER OF AFFIRMATIONS