The Rally to Stop Genocide will feature leading voices in the effort to stop the genocide in Darfur, including a broad spectrum of prominent faith leaders, political figures, human rights activists, celebrities, and survivors of genocide.

This is an important event, I am looking forward to attending with a group from my church and with two remarkable men, Angelo and Samuel, refugees, survivors… 2 of the lost boys of Sudan.

These “boys” are now grown men and they are victims of the lengthy Civil War in Southern Sudan, which contributed to the current crisis in Darfur, Sudan.  There are numerous links and interweavings between the current genocide and the slaughter of the families of the lost boys many years ago.  The complexities of the situation and how they relate to one another slowly unfolds as the lost boy share their stories… the images of their loved ones murdered before their eyes…memories of the 1000 mile, three month walk to safety, continual running and hiding from those who sought to kill them, some of the same people responsible for the current genocide in Darfur.  And their deep grief over the death of their leader John Garang.  Yet, in spite of the stark reality of their history, these men want to return to their country and be part of the process of ending the genocide,  of assuring that the peace is upheld and of restoring and rebuilding their homeland. 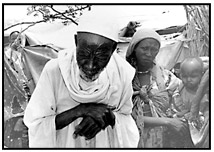 There is much to be done!  And no one person can do it all, but we can each do SOMETHING!  We live in a time when Genocide is occuring…On Our Watch and with our knowledge… and we are responsible to do something… to raise our voices in opposition to the ongoing crisis, that continues on a daily basis even with the full knowlegde of the UN, the United States government, and more importantly, the people of the world.  We cannot turn our backs, we must do something…

Is Employee Satisfaction Important to Success?